Over 70 NFB of Colorado members converged on the Colorado Capitol on Friday, February 28 to introduce the concerns of blind Coloradoans to the General Assembly.

We were fortunate enough to meet with many members of the House and Senate.  Almost none of them were aware that there was a waiting list for Vocational Rehabilitation services, let alone that the Colorado wating list was not only the largest in the country, but double its closest rival.  They know now.

Below is the Fact Sheet from the NFB of Colorado’s 2014 Legislative Memorandum concerning DVR’s waiting list.  Every member of the General Assembly received a copy of this full document.  It can be found at <a haref=http://www.nfbco.org>www.nfbco.org</a>.

The Colorado Division of Vocational Rehabilitation (DVR) under the Colorado Department of Human Services (DHS),  aids and assists people with disabilities in procuring skills training, post secondary education, transition services other employment related opportunities, and ultimately competitive employment.  DVR receives approximately eighty percent of its funding from the federal government based on a formula which includes approximately a twenty percent state match.  If the State does not provide the full amount of match, DVR cannot secure the maximum amount of federal funding.   Since April of Last year, DVR has been on an “order of selection.”  This means that it has not been accepting new clients and, therefore, not providing the core services which it is mandated to perform.  Currently DVR has an active caseload of approximately 7,500 individuals while over 6,100 individuals are on a waiting list.  More persons with disabilities are waiting for rehabilitation services in Colorado than any other state in
the union.

The Federation believes that past mismanagement of the agency is largely the cause for the historically high numbers on the waiting list.  Last year’s legislative audit confirmed these very disturbing past practices of the Division.  However, the plan identified to resolve these past issues seemed largely reasonable and achievable during the prescribed time periods.  We applaud DHS’s Executive Director, Reggie Bicha, and his team including Vicki Manley, Director, Office of Community Access and Independence and the new Director of DVR, Joelle Brouner, for navigating DVR through the difficult audit period and setting a new course for the agency.

One of our major concerns is that the audit findings are being used to hold DVR back and prevent it from fulfilling its core purpose.  As stated above, over 6,100 individuals are on a waiting list due to DVR's order of selection and are not being served.  We receive many calls each week regarding blind individuals who are in desperate need of vocational rehabilitation services and are being forced to struggle needlessly.

We have received word that as of February 24th, DVR will be taking 500 individuals off the waiting list.  The NFB of Colorado will be meeting with Director Bicha and senior management at DHS very soon to discuss ways DVR can eliminate the remainder of its staggering waiting list as expeditiously as possible.  We will keep the General Assembly informed as to the progress made and the need for possible Assembly intervention in some manner including potential supplemental appropriations to capture all federal dollars to serve those in desperate need.

Waiting for More Than a Year


I apologize for the hastiness of this ..., but I felt it necessary to get this information to you without delay.
My name is Jamie Principato, and I have been on a DVR waitig list for over a year now. I applied for services around January 20th, 2013, and though I was discouraged initialy from applying, I persisted and went through all the motions to get on the waiting list. I was told at the time that some services could be provided to me while I am waiting, but this has not been the case, and it has been difficult until recently to get information from the office regarding the status of my case. I applied for services at the South Denver office. Since applying for services, I have been attending classes part-time at Arapahoe Community college and paying for my tuition, fees, books and assistive technology out of pocket, and have now completely emptied my savings account and accumulated debt to stay in school and prevent any further delay in my pursuit of a career in Engineering. I have had to do without orientation and mobility since moving to Colorado and have had to spend a significant amount of time orienting myself to the area and self teaching the skills of blindness that I have needed in my classes, including learning to use unfamiliar screen readers and devices for data collection in laboratory settings.
Posted by National Federation of the Blind of Colorado at 2:51 PM No comments:

Scott Seder: 'I want to provide for my family again. It's a pride thing.'
Scott Seder says he has applied for more than 400 jobs in the past
year, desperate to come anywhere near what he used to make before
losing a full-time warehouse job in May.
But time and again, prospective employers tell Seder that his legal
blindness leaves them skeptical that he can do the job,  and they are
unwilling to give him a chance to interview, let alone prove
otherwise.
"When you have DVR (the Colorado  Division of Vocational
Rehabilitation) backing you, they seem less likely to push you down
the pipeline,"Seder, 46 of Colorado Springs said. "There are small
companies that could not afford the equipment I may need and I can't
afford it. Others just won't try. If you have DVR on your side, they
can help with that, offer you support."
Seder is among more than 6,000 Coloradans on a waiting list for
services through the Division of Vocational Rehabilitation, a state
agency that provides training, equipment and support for people with
disabilities seeking to enter or return to the workforce. It is the
largest such wait list of any agency of its type in the country.
"In the long run, you're not saving the state any money. You have
people wanting to be in the workforce, paying taxes and providing
revenue, and they are absolutely not providing services," Seder said.
There is no doubt in Seder's mind that he can work. He spent 2.5 years
with EnvisionXpress in Ft. Carson, handling everything from sales to
warehouse duties. He was laid off after the federal spending cuts
known s sequestration forced the company to cut its staffing. Seder
said he understood that as the last person hired, he would be the
first to go and figured he would be able to find work quickly with the
help of DVR.
He applied for services in May at the Colorado Springs office of DVR
but knows it could be a long time before he could get services. While
the DVR announced last week that  it would take 500 people off the
wait list, his counselor said he likely would not be among them. The
counselor has been incredibly supportive and genuinely frustrated that
she cannot do more for him, but "they have tied her hands on this,"
Seder said.
For now, he is working less than three hours a day in a central food
preparation kitchen for Colorado Springs School District No. 11, where
in a given day he could be chopping and dicing the veggies for 40
gallons of salsa or shredding head after head of cabbage for cole slaw
or chopping veggies for thousands of salads.
He's glad to have any work at this point, but he made more in two days
at his old job than  he does in an entire week with the school
district. He'd take more hours if he could get them, even though he is
making minimum wage now,  to take care of his wife and three sons.
"I don't want to be on public assistance," Seder said."I want to
provide for my family again. It is a pride thing."
Seder said he is interested in administrative work and feels he is
already qualified for it, but would also be interested in training for
a career in culinary arts or tech support if he can access training
for it with DVR's support.
"Really, I'll do any kind of work," Seder said.

Posted by National Federation of the Blind of Colorado at 2:22 PM No comments:

Coloradoans on Hold: Real Stories from the VR Waiting List

Coloradoans on Hold: Real Stories from the VR Waiting List
By Dan Burke 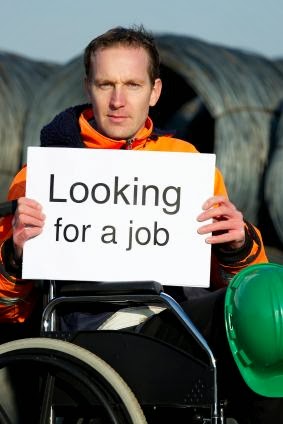 Earlier this month, the NFB of Colorado started putting out its callfor names and stories from blind and other Coloradoans withdisabilities who have been placed on Colorado's Division of VocationalRehabilitation (DVR) waiting list, or those who had been discouragedfrom even applying.  We have been increasingly concerned that more andmore blind and other Coloradoans with disabilities were going to beforgotten, and that no discernible plan or action was in the works todo anything about it.Out of this concern, we've met with DVR's new Director, Joelle Brounerearlier this month, and on Tuesday, February 18, President ScottLabarre sent a letter to the administrator of Colorado's Department ofHuman Services to request an appointment to talk about the waitinglist and other matters.  His name is Reggie Bicha, and his departmentincludes DVR.  To his credit, his office replied the same day and anappointment was set for Friday, March 7.Then, this week, DVR announced that it had at last received permission from the higher-ups in CDHS to begin squeaking open thevalves of its waiting list of more than 6000 Coloradoans withdisabilities.  After slamming the door on all new clients last April,this is a welcome sign.  The active services valve, however, will onlybe ratcheted open in phases.According to a letter sent out to "stakeholders" on Tuesday, the first500 clients who have been caught in the waiting-list-limbo were movedoff that list on Monday.  They should be contacted shortly, whileanother slug will follow in 45 days.  The first priority will be thosewith the classification of "Most Significant Disability" under stateand federal rules.  Again, this is welcome, but we need to keep inmind that there are now over 6,000 people who have applied forservices, been determined to be eligible for services, but have simplyhad to wait because no new Individualized Plans for Employment (IPE)were being developed, and no new services being approved or provided.Whittling down the waiting list is going to take some time.  Thatmakes sense when you think about it.  It's taken almost a year for itto get this big, and other new applicants will continue to comeknocking on the door.DVR can't just open the floodgates and then swamp themselves, either.The process of contacting clients on the list, meeting with them andbeginning the process of identifying vocational goals and planning forservices is one of the most important activities in the VR process.We want them to do this right, and so do they.But that is all the administrative stuff.  The thing that is criticalhere is that this waiting list hurts blind people in Colorado, as wellas DVR applicants with other disabilities.  The numbers are huge -it's the biggest Voc Rehab waiting list in any state in the uniontoday.  And because it's so big, it's hard to think of how it affectspeople, real people that we may know.So what will follow are some of the stories of those people.  Maybesome of them will be in the first 500 to move off the waiting list,but as long as there is a waiting list we need to make sure thatGovernor Hickenlooper, elected Representatives and Senators in theGeneral Assembly and the professionals running the Colorado Departmentof Human Services can't forget the words and  the faces of those thatare still waiting.Yes, those stories will appear in the coming days and weeks, and theNFB will do the telling.*****
Posted by National Federation of the Blind of Colorado at 7:53 PM No comments:

National Federation of the Blind of Colorado